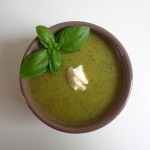 This zingy zucchini soup is a family favorite — healthy and incredibly easy to make. Okay, it’s not really zucchini season yet but were gearing up for summer here in Paris, especially on sunny days like today. And to be honest, thanks to greenhouses and globalization, we can get zucchini all year round, from Morocco in the winter, Spain in late spring and France throughout the summer and fall. Piping hot in winter, chilled in summer, this soup makes a perfect starter — or main course for a light meal, accompanied by a salad.

Looking ahead to my favorite time of year, when spring segues to summer and the days stretch out to 11 p.m. (Paris is as far north as Montreal), I have more warm-weather recipes coming your way in the weeks ahead, including barbecue specials. In the meantime, I’d like to share a few items from friends that have appeared in the last week.

If you haven’t yet read Ann Mah’s Mastering in the Art of French Eating, a tour de France of great cuisine with a touching personal story as backdrop, take a look at her New York Times article on her travels through France last summer to taste five signature dishes from Brittany, Lyon, Languedoc-Roussillon, Provence and Alsace. I met Ann in Paris after she fell in love with a friend who had worked with me at The Moscow Times in the early 1990s.

Ann’s article was followed, again in The New York Times, by Liesl Schillinger’s delightful memories of her childhood days in with a farm family in central France. I met Liesl, also in Moscow in the 1990s, when her mother and I became friends. Liesl is now a writer and hot literary critic for the New York Times Book Review and other top publications.

Finally, a new friend, Jonell Galloway, is offering a 4-day workshop in the food and wine of the Beauce region and the Loire Valley in September. A good way to see a lovely part of this country and learn about its culinary traditions and its vineyards. Jonell and I connected via our web sites — I love her Rambling Epicure, and she appreciates The Everyday French Chef. One of her many interests is food art. Check it out.

And in the meantime, happy cooking!