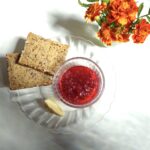 When summer strikes, it’s time to head to the market for red currants — or, if you’re lucky enough to have them in your garden, to go on a picking spree. These jewel-like berries make a fabulous jam that is remarkably easy to prepare. Unlike cherries, plums or apricots, red currants do not need pitting. And unlike red currant jelly, the jam does not require the tricky step of squeezing the cooked berries through a cheesecloth (étamine).

I’ve been making jam for many, many years, and red currant is one of my favorites. It’s not just the ease of preparation. It’s also the delightfully tangy flavor. Beyond the obvious uses for red currant jam — on toast, buttered bread or croissants — it also marries well with roast beef or chicken, much like cranberry sauce as a condiment with roast turkey.

And here’s another thing. You can use the same recipe with black currants (cassis), which make perhaps my all-time favorite jam. I would have included it today but black currants haven’t come on the market yet. We should start seeing them around mid-July. 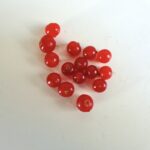 In the good old days, when I still had my country cottage in Burgundy, I had both red and black currants growing in the garden in profusion. Every year there was a tense moment in early summer when the berries started to ripen. I could only get down to the cottage on weekends. Who would get the ripe berries first, me or the birds? Sometimes the birds won, but I usually managed to pick enough for a batch or two of jam. And once the jam is in the jars, you can keep it for months or years.

Which brings me to another thing. How much jam is enough for a batch? If you set out to make a dozen jars, the process can seem overwhelming. Well, dear readers, sometimes I only make a jar or two at a time. So far this year I’ve made three pots of strawberry jam and two of red currant. Still to come are apricot jam, plum jam, blackberry jam and fig jam, and maybe some others as well. Preparing a batch of 2-4 jars takes less than an hour. By making small batches, you won’t get exhausted — and by the end of summer, you’ll have a lovely collection of jams in your cupboard.

Now for the good news. Making jam used to be a tedious process that involved melting paraffin to seal jam jars with special lids. I remember my mother, a great jam maker, standing heroically for hours over boiling pots of fruit and wax in the steamy heat of a Wisconsin summer. No more. As I learned upon arriving in France, paraffin is not needed to seal the jars, and no special jars are needed. Here’s how it works.

During the winter months, as you finish a jar of jam — store bought or homemade — you can remove the label and wash it. By the time jam-making season rolls around, you should have a collection of jars ready to go. On jam-making day, you sterilize the necessary number of jars and their lids for ten minutes in boiling water, then set them upside down to dry on a clean dish towel. When the jam is ready, you ladle it into the jars and screw on the lids. A vacuum will form as the hot jam cools, and this will preserve it perfectly.

Finally, I’d like to address the relative merits of jam vs. jelly. Fruits with a high pectin content, like red currants of quince, are often used to make jelly. But while jelly has its charms, making it at home can prove challenging. I learned this the hard way one year when a friend with a quince tree in his garden brought me a huge bagful. Fine, I thought, I’ll make quince jelly. I boiled them up with sugar, as the recipe specified, then attempted to squeeze the fruit through a cheesecloth to obtain the juice. Next thing I knew there was quince all over the ceiling and walls of my kitchen. Never tried that again… 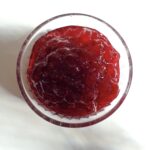 Jam is a different matter — easy to make, and so rewarding in the bleak midwinter when you open a jar and dip in a spoon. The intense burst of flavor as you taste the fruit will transport you back to blissful summer days. And you’ll have the satisfaction of knowing that you did it yourself. With just fruit and sugar.