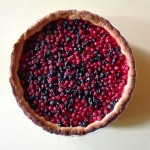 Here’s a treat for summer: a luscious tart made from berries that only come around at this time of year. Variations are many. My favorite version is with red and black currants, and I’m lucky enough to have a garden where I can grow them. But most farmers’ markets will also have them in season. So scout around, and if you can’t find fresh currants this recipe also works well with blueberries in midsummer and blackberries in the autumn.

I have sometimes wondered whether this confection might not explain the etymological origin of the phrase ‘fruit tart’ — because the berries, before adding the sugar, are, well, tart. But apparently that is not the case. According to a quick search, the word ‘tart’ meaning ‘sour’ derives from an Old English word, ‘teart’, that means ‘painful’ or ‘sharp’. The English word ‘tart’ meaning ‘pie’ is said to derive from the French word ‘tarte’, but at least one dictionary admits that the idea of sourness may have had some linguistic influence. For those of you who are uninterested in such matters, my apologies. But personally I find this sort of exploration to be, as my friend Lindy says, fruitful research.