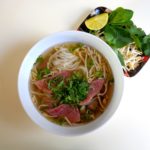 Pho, the remarkably fragrant, herb-topped Vietnamese beef and noodle soup,  is ubiquitous in Paris. I never considered preparing it at home until a recent day when my daughter asked me to make it for dinner. As one who enjoys a challenge, I looked into the matter and informed her that we could have it the next day — as preparing the broth for pho takes several hours. I went ahead and made the soup, with moderate success, then consulted an expert.

I made it a second time, and this time everyone at the table proclaimed that the balance of tastes was just right. The broth, perfumed with many spices, was subtler and slightly sweeter. Each mouthful produced an explosion of flavor. What had changed?

My expert was Martin Charmoz, owner of Be Bo Bun, a casual Vietnamese restaurant around the corner from me. A French devotee of Vietnamese food, he makes a delicious pho and was happy to give me some hints. It turned out that I had omitted a key ingredient, lemongrass, and had added others in the wrong order. I had also gone too quickly. ‘Pho is a Paris institution,’ Martin said. ‘But making it takes time.’

This is true. The broth needs to simmer for at least three hours — they cook it for ten hours at Be Bo Bun — and assembling the soup is a bit of a production, not your usual Everyday French Chef-style fare. However, the results are so spectacular that it’s worth the time.

And now for some lore. Pho, written phở bò in Vietnamese, is said to have emerged in northern Vietnam during the French colonial period. Backing up this thesis is the notion that pho’s name is linked to the French dish pot-au-feu, in which beef is boiled with vegetables to produce a tasty broth. And indeed, pho is pronounced like the French word feu — to say it in English, follow the ‘f’ sound with the ‘u’ sound from ‘put’. However, a competing thesis suggests that pho derives from a the soup version of a southern Chinese dish, Cantonese beef chow fun. For an engaging discussion of pho’s origins, click here.

With its huge Vietnamese population, Paris boasts a wealth of restaurants that serve pho, as do many cities in the United States and elsewhere. So why bother making it at home? I could argue that the the delightful aroma wafting from you kitchen as the broth simmers justifies the time involved. Or that the pleasure of bringing a healthy, flavor-packed meal to the table makes it worth the effort. But there’s a simpler reason. In a word, it’s fun.