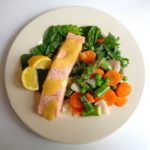 I’ve been serving a medley of seasonal vegetables this spring — asparagus, young carrots, peas and red spring onion — and wanted to try it out in a salad version. So here it is, bathed in lemony homemade mayonnaise and served alongside steamed salmon on a bed of tender greens. The veggie combination is a fresh take on macédoine, a classic French dish of chopped vegetables in mayo that today feels decidedly old-fashioned.

Macédoine has an interesting story. It is named after the Balkan region of Macedonia, which once covered a large swath of territory. The mixture of veggies is said to recall the mixture of populations that shared the region, and indeed an ethnic map of the area from the 19th century is a mosaic of different colors. Amusingly, in the Balkans today, the dish is known as salade française (French salad), while in other parts of Europe it is called salade russe (Russian salad). But when I was living in Russia, chopped veggies in mayo was a dish known simply as maïonez (a catered version of which once brought down the entire newsroom of The Moscow Times when the mayonnaise had gone bad).

I was curious about the difference, if any, between macédoine and salade russe, and looked into the matter. It turns out that a true Russian version is more complex due to the addition of chopped pickles, hard-boiled eggs and one or more types of meat or sausage to the basic mixture of veggies and mayonnaise. It is said to have been invented by Lucien Olivier, a Belgian chef who worked at a fashionable Moscow restaurant in the 1860s. (A version of the dish was already popular in Belgium at the time, so whether he actually invented it is open to question.) The dish became known as salat Olivier — until the chef’s assistant ran off to another restaurant and renamed the salad Stolichy (for the capital city, even though Russia’s capital was actually Saint Petersburg at the time).

Those two salads still exist in Russia, and have given rise to multiple foreign variations. A Swiss chef, Joseph Favre, created a gourmet version by adding chicken, partridge or grouse, ham, roast beef and anchovy fillets to the veggies and mayo. A Spanish version includes tuna, roasted red pepper and green olives. In Spain, by the way, the name ensaladilla rusa was banned during the Franco years, with the dish rechristened as ensaladilla nacional. Other countries that wanted no mention of Russia in their culinary repertoire were Romania and Moldavia, where it was called salata de boeuf, or beef salad.

Beef salad? We’ve strayed from the recipe in this post, which has no meat, eggs, pickles or olives and in fact is far lighter than the French macédoine of yore. When I first arrived in Paris, a scoop of inspid canned veggies drowned in thick mayo was commonly seen as a starter in unpretentious bistros. But thankfully French cuisine has evolved since then.