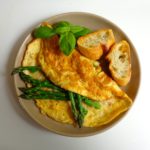 The French love affair with asparagus and eggs blooms every spring, when the spears — green, white or violet — are served bathed in luscious hollandaise sauce. This year I decided to try giving asparagus a starring role in an omelet, and this, too, proved to be a happy marriage of flavors, enhanced by tangy parmesan. As preparation takes less than 10 minutes, it’s an easy lunch dish that is both elegant and satisfying.

Green asparagus is best for this omelet for reasons both esthetic (the color is beautiful against the eggs) and practical (you don’t have to peel the spears). I would not have been able to produce such an omelet when I arrived in France more than 40 years ago. At the time, only white asparagus was available. I learned to love it, but preparing it is a chore.

White asparagus is white because it is grown underground, like Belgian endive. The spears tend to be quite thick with a tough peel that must be removed. The flavor is reputed here to be more delicate than that of green asparagus, although I don’t find that to be the case.

Violet asparagus is seen here more rarely. It, too, is grown underground, but the heads of the spears are allowed into the light, which gives them their purple color. Why they don’t turn green instead, I don’t know.

Happily for lovers of green asparagus, it is now widely available in France and in fact begins appearing as early as March, imported from Spain. If you are lucky enough to live in a region where wild asparagus is available, by all means use it. (As it tends to be quite thin, you will need more spears per omelet.)

An asparagus-parmesan omelet can be the centerpiece of lunch or a light supper, accompanied by a green salad and followed by cheese and/or fruit. It can also be served as a starter at dinnertime. As for wine, I’d suggest a fruity red to accompany this omelet, for example a Beaujolais or a Chinon.

This entry was posted in 4. Omelets, Soufflés, Quiche. Bookmark the permalink.