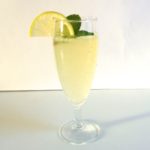 With Thanksgiving and the holiday season around the corner, here’s a crisp, citrus-flavored apéritif from the Loire Valley to add sparkle to the festivities. Soupe angevine, literally soup from the Anjou region, combines sparking white wine with lemon juice, sugar syrup and Cointreau. It is traditionally mixed by pouring the bubbly into a large bowl and adding a soup ladle of each of the other ingredients — hence, perhaps, its name.

I owe this recipe to my friend Nancy, who was served soupe angevine during a festive occasion with relatives outside the Loire city of Nantes. When she returned to Paris raving about it, I had to try it. It produces an effect similar to a kir royale (Champagne and crème de cassis) — light enough to go down easy, powerful enough to deliver a pleasant kick.

The bubbly used in the region is Crémant de Loire, crémant being the name for Champagne-style French sparkling wines produced outside the Champagne area. Burgundy has its crémant, as do Alsace, Bordeaux and Savoie. Differences are minimal — in fact, if making this drink outside France, any dry sparkling white will do.

The ‘angevine’ part of this cocktail’s name derives from the city of Angers, the capital of historic Anjou, which is renowned for its fine cuisine. A beloved native son was the culinary critic Curnonsky, known as the Prince of Gastronomy, who described the region’s cooking as ‘reasonable, sincere and good-natured’, particularly praising its butter, its river fish, its fruits and its crémet, a whipped cream dessert.

When preparing to write this post, I got to thinking about Angers and other French places with English-looking names. Of course Angers (pronounced ahn-ZHAY) has nothing to do with anger, deriving from its region, Anjou. Tourists rarely visit Nevers, the seat of the central Nièvre region, but never say never — say nuh-VAIR. As for the jewel of the French Riviera, Nice (NEESE), it’s definitely nice but its name apparently derives from Nissé, the ancient name of a natural spring used by Greek tradesmen who settled there.

This brings me to a town in southwest France that I visited many years ago when my boyfriend bought a crumbling farmhouse nearby. The postcard I sent home from Condom (kohn-DOHN) produced gales of hilarity when it reached my father. And indeed, this town lent its name to the protective sheaths amusingly known colloquially by the French as capotes anglaises (English hoodlets) and by the English as ‘French letters’.

If you’ve read this far, you may need a drink to get over this bout of etymological silliness. So head to your kitchen, break open the bubbly and mix up a little French soup, Angers-style. Pour it into pretty glasses and enjoy. You won’t regret it.