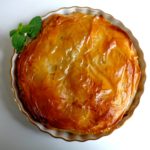 Tangy and delightfully crispy, the Mediterranean spinach-cheese pie known variously as spanakopita, borek or boureka is both fun and easy to make. In this version, cinnamon is added to the spinach-feta filling for a slightly exotic taste that seems to please. When I made this pie for lunch the other day, it disappeared in minutes. Although the dish can be found in Greek shops in Paris, it tends be bland. The best idea is thus to make it yourself. 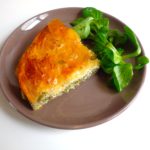 I did a little research into the origins of this dish and, although it is often assumed to be Greek, or perhaps Turkish, it apparently reached the Mediterranean via the nomadic Turks of Central Asia, spreading west across the Balkans, north to Romania and Moldova and south to North Africa. In most versions, the pie is constructed using paper-thin filo dough — the name of which, I just learned, is Greek for feuille, or leaf.

It’s great fun working with filo, but you do need some sophisticated equipment — a paint brush. Working quickly, you coat each sheet of dough with melted butter or olive oil and layer them into your pie pan one at a time before adding the filling. When baked, they puff up like the French pâte feuillété, but are arguably more delicate and definitely crispier.

Other fillings for savory filo pies include mixed cheeses, minced meat, potatoes, roast peppers and squash, while the best known sweet filo pie is baklava, filled with walnuts and drizzled with honey. The pies may be baked in a round or rectangular pan, formed into individual triangles or rolled into ‘cigarettes’. Sometimes they are fried in oil, for example in North Africa — where the word borek morphed into brik, and a single (slightly thicker) sheet of pastry is used to encase the filling, most typically a raw egg.

But why is this pie called une tourte in French rather than une tarte? Mes amis, I have the answer thanks to my very recent acquisition Le Grand Larousse Gastronomique, a fabulous 1000-page encyclopedia of food that was presented to me as a gift this week.

A tourte, as it turns out, is a pie with an upper crust, while a tarte is open-faced. Although aware of the distinction, I’d never seen it spelled out before turning to the Larousse entry on tourte: ‘Akin to pâtés en croute and English pies, today’s tourtes are considered rustic or regional cuisine. Formerly, they played an important role as starters: tourtes filled with truffles, oysters, pigeon, foie gras, small delicacies, forcemeat, etc. were highly fashionable until the 17th century, when they were replaced by lighter dishes…’

Well! I’m not sure I’ll be posting recipes for truffle or oyster pie anytime soon, but I am extremely grateful to have access to such history at my fingertips. More French food lore will be coming your way in the weeks ahead. And in the meantime…

This entry was posted in 4a. Savory Tarts and Tartines. Bookmark the permalink.