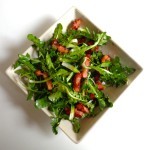 What to do with those pesky dandelions that pop up at this time of year? The French solution: make a salad. The slightly bitter leaves marry perfectly with bacon, which is how I first discovered this salad, at a Parisian brasserie many years ago. It is sometimes served with croutons or eggs, or both. These days dandelion salad is seen less often at restaurants, so I make it myself. Crisp, fresh and incredibly nutritious, it’s a fine way to bounce into spring.

My most memorable experience making dandelion salad was in Moscow, where spring comes a couple months later than in France. I was at the dacha of an acquaintance with my friend Lindy Sinclair, who in those days wrote a cooking column for The Moscow Times. When we spotted a lawn bursting with fresh dandelions, we gathered them into a basket, fried some bacon and made the salad. She later included dandelion salad in her cookbook The Wistful Gourmet (which is now available for viewing online). Lindy, who now divides her time between London and the Ardèche region of south-central France, blogs regularly about her superb garden at fruitfulresearch.com.

I’ve often wondered why dandelion, which derives from the medieval French dents-de-lion (‘lion’s teeth’, because of the jagged edges), has turned into the far less elegant pissenlit (‘piss in bed’) in current French. Apparently it has to do with the diuretic qualities of the leaves, although I have never experienced this effect myself. The French, with their long rural history, have many colorful expressions linked to plants, and the dandelion is no exception. My favorite: manger des pissenlits par la racine — ‘eating dandelions from the roots up’, meaning the situation you’ll find yourself in once you’re dead.

Which I hope will not be anytime soon for any of us. Happy cooking.