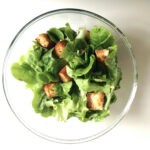 I like the challenge of going into the kitchen and creating a dish with whatever ingredients happen to be around. So the other day I made a zingy salad from a couple handfuls of lettuce leaves bathed in a garlicky mustard vinaigrette, topped with croutons straight out of the oven. I didn’t exactly create it because I’ve been making this salad for years. The pleasure was in finding the fridge nearly bare and still being able to produce a tasty lunch.

Usually I serve this salad as a first course, followed by anything from steak or Provençal chicken to pasta, for example penne à l’arrabiata or spaghetti with garlic and olive oil — these last two choices being vegan, like the salad itself. The point being that this salad packs a punch and deserves a main dish that will not be overwhelmed by the garlic. If you like, you can top the salad with crispy bacon cubes in addition to the croutons.

As we head toward spring, I’m finding myself increasingly wanting salads after a long, wintry spell of indulging in comfort food. And I’m not alone. The most popular recipe on this site has long been salade verte à la française, the classic French salad of Boston lettuce in a mustard vinaigrette, first published nearly eight years ago.

I find this surprising, and yet the statistics are there. As you may have noticed, there’s a list of Most Popular Recipes at the top right of this page. I update it from time to time using the Site Stats module attached to my web publishing software. I checked just now, and that basic French salad is right up at the top — for the past week, the past month and since it first appeared, with more than 30,000 of the site’s 1 million plus views over time.

Of course, looking at statistics over time doesn’t give a true picture of what’s currently most popular, because recipes that were posted several years back can accumulate more views than newer recipes. I recently tried to add a list showing which recipes had been most popular over a shorter period but, being technically challenged, I failed.

Maybe I’ll manage some day. In the meantime, here are some dishes that didn’t make the all-time top 10 but were among the past year’s 10 most popular: couscous royal (couscous with lamb, chicken and merguez), cerises à l’eau de vie (cherries in brandy), poule au pot (chicken boiled with vegetables) and artichauts vinaigrette (artichokes with vinaigrette).

Why these recipes? I have no idea, but suspect that somewhere along the line someone may have tweeted them or linked to them, sparking a burst of interest among people who then retweeted them, sparking more interest. This happened last August when someone with a huge Twitter following tweeted my recipe for coulibiac (fish pie in puff pastry), causing the site to crash repeatedly for a day due to the increased volume of clicks. And by the way, coulibiac briefly bounced French green salad out of the top spot as a result.

I find it interesting to try to imagine why certain very simple recipes remain consistently popular — for example, porc grillé aux herbes de Provence may sound sexy in French but it’s basically just pork chops. Yet it’s in the number two spot. And what’s so special about oeufs mimosa, the French version of deviled eggs, which features in the past year’s top 20, just behind the more exotic roast quail? And why do French classics like boeuf bourguignon or blanquette de veau rank well down on the all-time list?

It’s a puzzle. Perhaps it’s the very simplicity of certain dishes that explains their appeal — in which case this week’s salad with garlic and croutons fits the bill.

This entry was posted in 3. Salads and tagged bacon, croutons, most popular recipes, recette, recipe, salad with garlic, salade a l'ail. Bookmark the permalink.