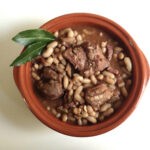 A couple years back I was served this intensely flavorful French dish of lamb and beans on a cold winter’s evening by an English friend who happens to be a superlative cook. Snow was drifting down outside her cottage as a maddeningly delicious aroma wafted from the kitchen — rosemary, thyme, bacon, garlic, tomato and lamb. When I asked for the recipe, she said she didn’t have one — she’d been making it so long that she did it by instinct.

Fast forward two years and I made it myself, having at last wrested a rough description of the process from Jane, the friend in question. White beans are cooked to al dente tenderness, then simmered with the lamb and other ingredients with a splash of red wine. It takes a few hours from start to finish, although little of that time is actually spent in the kitchen. And you can make as much or as little as you like.

‘I used to serve it for 20 people at parties,’ said Jane, a diplomat’s wife who has entertained everywhere from Moscow to Brasília. She described it as a lamb cassoulet, but I checked with a friend from southwest France who noted that cassoulet always includes duck or goose and pork. This dish, she said, sounded more like haricot de mouton.

Literally ‘bean of mutton’, haricot de mouton is an ancient French dish, the first written mention of which dates back to the 14th century — oddly, because at that time beans had not yet been imported to France from the Americas. According to various sources, the original name of the dish was halicot de mouton, deriving from the Old French word halicoter, meaning ‘to chop into pieces’. The celebrated French chef Paul Bocuse cites a 1651 recipe that mentions a ragoût of mutton en halicot (chopped up) — with turnips, not beans. But at some point in history, there was slippage. Beans were added, and the dish switched from left to right (‘r’ replaced ‘l’).

I took some liberties with Jane’s recipe — a necessity, in fact, as she didn’t provide proportions. And as cooking for 20 seemed a bit daft in a time of lockdown, I made a smaller quantity involving a deboned shoulder of lamb and about a pound of dried beans. That made enough to serve five or six. As per her recommendation, I started a day ahead of time to allow the flavors to intensify overnight. And when I served it last Saturday, snow was drifting down outside my veranda…

Before leaving you, I’d like to mention the recent work of two more friends that you may find interesting. Ann Mah is a food and travel writer who also produces novels from time to time. Her monthly newsletter is a gem, and as she recently moved from Washington to Hanoi the stories and recipes have taken on a Vietnamese flavor. You can sign up for the newsletter here. And Julia Watson, also a food writer and occasional novelist, has just launched a new blog, Tabled, with recipes from around the world and news about the food business. Her latest posts feature rendang, a beef dish from Indonesia, and orange marmalade, one of England’s greatest contributions to global cuisine.

This entry was posted in 7. Meat Dishes and tagged haricot de mouton, lamb and beans, recette, recipe. Bookmark the permalink.