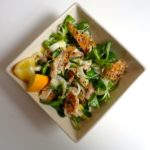 A salad of smoked fish makes a delightful lunch as the days grow cooler. In the salad pictured here, I used smoked mackerel, which is sold in France covered in crushed black pepper. Its tawny hues contrast nicely with the deep green of lamb’s lettuce and pale Belgian endive. Other options for the fish include smoked trout, smoked salmon or the perennial French favorite, smoked herring, a bistro classic that is popular here in the winter months.

In the bistro version, whole fillets of smoked herring are served alongside boiled potatoes, most often with a couple of carrot rounds and raw onion rings on top. As indicated by its name — filets de hareng pommes à l’huile — the dish, which is served as a starter, is bathed in 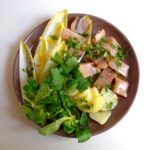 oil. In my salad version, the herring is chopped and accompanied by greens. It’s a bit lighter and brighter, and can make a proper lunchtime meal.

When I first arrived in France, I was surprised to learn that herring came in two varieties — smoked or pickled. The latter, known as hareng de la Baltique, is served in thick cream, either chopped or rolled up tightly stuffed with capers and chopped onions, in which case the dish is called rollmops — ‘roll ’em ups’, get it? But the real revelation was smoked mackerel, which is fleshier and richer in flavor than herring. I buy it at the farmer’s market nearly every Sunday. Just delicious.

Smoked fish has played a long role in French culinary history. The smoking and salting allowed the fish to be preserved in the centuries before refrigeration was available. Perhaps this is why smoked fish also have interesting linguistic connections in France. The unfortunate maquereau is not just a tasty fish but also means ‘pimp’ in French. And as for smoked herring, when sold whole but split in two it becomes un gendarme (a policeman).

But this need not concern us cooks. All we need is a few minutes and a chilled bottle of white and voilà — our smoked fish salad is ready to grace the table. Happy cooking.