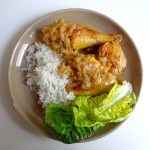 The French colonial empire once stretched across the globe, with the happy result — once independence was restored to the colonized — that the cuisine of many cultures is now available in France. Poulet yassa, or chicken marinated in a sauce of onions, lemon juice and mustard, is one such happy dish. Originally from the Casamance region of southern Senegal, it is now highly popular throughout former French West Africa, and also in Paris.

The other day my daughter had a hankering for chicken yassa, which France’s huge community of expatriate Malians, Senegalese, Guineans, etc., serves at home and in restaurants. It is also available at the African stand of our local street market on Sundays, but on that particular day it was raining so hard that I decided to skip the market and make it myself. I used a recipe from an African cookbook, Cuisines d’Afrique (Edisud, 1995), and tweaked it with tips from a former Senegalese student, Awa, a brilliant cook.

Chicken yassa is a great party dish. If you’re cooking for a smaller crowd, you can either halve the recipe or refrigerate the leftovers for another day. It only gets better with time. Traditionally the chicken is served in a large dish brought to the table, with diners helping themselves. It may be served with rice or couscous, and I like a green salad on the side.

I first encountered chicken yassa in the West African country of Mali, a very special place for me as it is where I adopted my daughter. Although one of the world’s poorest countries, Mali has a very rich culture in music, art and … cuisine. It is a generous culture where sharing is everything. An extra guest will always be welcome at the table. With dishes like yassa, there is always enough for one more.

Yassa may also be made with meat (usually lamb) or fish. You can use the same recipe and simply substitute meat or fish for the chicken. In West Africa, the chicken, meat or fish is traditionally grilled sur la braise — over the embers of a wood fire. Small barbecues for such grilling dot the red-earth roads of cities like Bamako or Dakar at night, with families gathered around as they prepare their dinner. But as that is not always practical for those of us who live in cities in the west, the chicken may be grilled in a skillet as well. Another variation is to substitute lime juice for the lemon juice. Both produce a deeply rich dish. 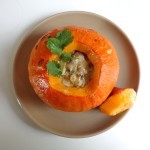 Back to Paris… Cold  weather has finally set in, prompting me to revisit some of the winter dishes already posted here, with new photos. The first, potimarron farci (stuffed pumpkin), emerged as one of the site’s 30 most popular dishes when I made a tally a couple of weeks ago. A small pumpkin is stuffed with a mixture of mushrooms, onions, cream, wine, thyme and grated cheese. It is then baked and served whole or in slices. Applause guaranteed.

The second is a risotto with radicchio, a specialty of Venice with a unique and surprising flavor. The bitter leaves are shredded and partially cooked before being added to rice simmered in broth, with butter and parmesan added at the end. This is comfort food at its best, and can work as a main dish or a side with grilled meat or fish. Easy to make, this risotto will warm the coldest evening.

Both of these dishes are vegetarian, and they can be adapted for vegans by substituting coconut milk for the cream, olive oil for butter, and omitting the cheese.