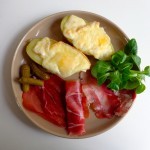 When winter comes to France, it’s time for raclette. This immensely popular dish of potatoes smothered in melted cheese, accompanied by cured meat and pickles, has come down from the Alps to become a favorite nationwide. It evokes memories of ski slopes, where of a snowy evening you could gather with friends to enjoy a restaurant meal of raclette, with a half-wheel of cheese brought to your table and melted under an electric grill.

These days, raclette may be made at home using a smaller grill with little trays for pre-cut slices of cheese. It’s a great party dish — everyone gets into the act. Lacking a raclette machine, you can melt the cheese in the oven. The results are no less spectacular, and tasty. And if you’re feeling rustic and have a fireplace, you can melt the cheese over the embers, as they did in the very old days. Remember Heidi, the Swiss children’s story?

Choosing the right cheese is, of course, essential. The cheese now called raclette has a pungent, fruity flavor. It is softer than your standard gruyère or comté, but hails from the same general region, so either of these would be an acceptable substitute. It is also important to choose potatoes that have a bit of flavor and will hold together when boiled.

Serve raclette with a crisp chilled white, and perhaps a salad to aid digestion. For the cured meats, prosciutto, coppa and bresaolo make a good combination, or use your imagination.

Now, on to some news about The Everyday French Chef. During the holidays I updated the list of the site’s 10 most popular dishes, featured in the column on the right of this page. Veal scallops with cream remains the overall favorite, followed closely by Green salad, French style. The veal was one of the first dishes I posted, in the early days of the site more than three years ago, so longevity may account for some of its popularity.

The main surprise of this list, other than the popularity of pumpkin (three recipes), is the near total lack of — desserts! The only dessert in the top 10 is Profiteroles, and in the 20 that follow only Kouglof appears. I’m wondering why. Could it be because this is a site for everyday cooking, and desserts often require a bit more time? Please send feedback! I’d love to hear your ideas on the kind of recipes you’d like to receive.

This being said, there are so many recipes on the site now — nearly 300 — that I have decided to take a break from weekly posting and instead to post once every two weeks, at least for a while. I would like to compile some of these recipes, and new ones, into a cookbook, and that takes time. My new year’s resolution is to bring this project and other literary endeavors to completion by the end of 2016. So watch this space, and…

This entry was posted in 8. Vegetables and tagged most popular recipes, raclette, recette, recipe. Bookmark the permalink.