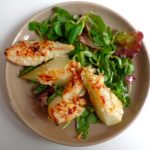 Fruit became a major issue this summer down in Burgundy, where a great year for fruit of all kinds — cherries, plums, apples and pears — turned my garden into a paradise for fruit-loving wildlife of the alarming variety (more on that later). Now that I’m back in Paris, where I can safely gather fruit from the market, I decide to try my hand at a salad featuring pears topped with parmesan and roasted to mouth-watering succulence.

Preparation is very simple. You quarter the pears and (ahem) pare them, place them in a baking dish, top with grated parmesan and bake for about half an hour. When they’re golden brown and still warm, you place them on a bed of greens dressed with garlic-infused olive oil and balsamic vinegar. Simple, but…

In the country it was impossible to gather the hundreds of pears falling off the tree in the back yard due to the profusion of hornets and wasps buzzing around them. Now before you start thinking I’m some kind of sissy, allow me to describe a French hornet. It is very different from the frightening elongated variety we sometimes saw during my childhood back in Wisconsin — in that it’s even more terrifying. Picture a buzzing yellow-and-black striped poisonous flying object about the size of a woman’s baby finger, or even thicker.

When I first bought my cottage in Burgundy, I was told by the neighbors that one sting of a hornet was enough to kill a horse. In previous years, you’d see one every now and again, but they didn’t come close to the house. This year, they were everywhere, particularly under the pear tree and feasting on the many apples that fell to the ground early due to the summer heat wave here, right in front of our front door. And, yes, they came into the house — until I got the bright idea of keeping all the doors and windows closed, never mind that it was a beautiful sunny day. (Also unlike my childhood, France does not believe in screens over windows.) Wasps were also out in force, and in fact they still are — even in Paris, where they’ve made outdoor café lunching into a dangerous sport.

What Paris doesn’t have is the small creature called the lérot, a cousin of the dormouse that thrives on fruit. I discovered the lérot my first year down in Burgundy. Incredibly cute, with a black mask over its eyes and a long, tufted tail, it would run along the branches of the plums trees out in back, happily eating its fill. I happily watched. I was less happy when I discovered that the lérot likes to come indoors at night. Not just one — the whole family. I could hear them partying in the attic. Was I imagining things? To prove I wasn’t dreaming, they left a trail of droppings behind them.

This year a veritable army of lérots invaded the garden, chirping to each other from the fruit trees. I won’t mention what they did inside the house. And it wasn’t just my place. The whole area is infested, as a friendly chap at the garden store informed me when I asked what could be done about it. Nothing much, apparently.

A country friend blamed the population explosion of rodents and stinging insects on the weather — a very cold winter, a very wet spring and a heat wave that started in May. Whether or not this is true, I was very happy to leave the wildlife behind this week and come back to Paris, where my kitchen is critter free. As we head into autumn, I’m looking forward to creating many new dishes to share with you over the months ahead.