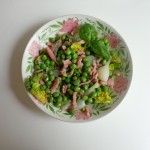 Went down to the country this weekend and planted some peas. It’s finally warm enough. If I’m lucky they’ll be ready by July. Thankfully the Paris markets are already bursting with fresh peas — flown up from Morocco or Spain. They’re not as good as the homegrown variety, but still a herald of spring. Every year around this time I find myself hankering for dishes with fresh peas. And what tastier dish can you imagine than this succulent French combination of peas with bacon, spring onions, lettuce and basil?

In fact I like fresh peas so much that I’m planning to give you another recipe in the days ahead. That would be peas, Moroccan style — a fantastic dish I tasted for the first time the other evening at a neighborhood restaurant. They came in a tagine platter, bathed in cinnamon and other spices I have yet to identify. But I’m hopeful that the chef, a Moroccan woman, will share her recipe. It’s not surprising that Moroccans would know a thing or two about peas. According to archeologists, peas have been part of the human diet for about 7,000 years, since not long after the dawn of agriculture. They were first cultivated in the Middle East and Georgia, the lands settled by the first modern humans out of Africa, and spread east from there to India and west around the Mediterranean. I don’t know much about peas in Middle Eastern cuisine, having never lived in that region. But if you have recipes, please share them. This is the season.