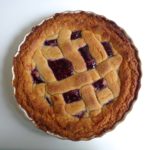 Linzertorte is one of my favorite desserts, and when better to serve it than over the holidays? This classic cake, which takes its name from the Austrian town of Linz, is now enjoyed worldwide. The nutty shortbread-style pastry is filled with jam — typically black or red currant or plum — but in Alsace, where it is often served over the Christmas season, raspberry jam is preferred.

I first began making linzertorte at the Café Dewitt in Ithaca, New York, where we turned out five fancy cakes a day along with soups, salads, sandwiches, quiches and a daily special such as boeuf bourguignon. The pastry is a sweet buttery dough to which ground nuts are added. Preparation is fun — you line a tart pan with part of the dough and use the rest to form ropes and create a lattice. The cake is often served with cream on the side.

There is plenty of lore about linzertorte, much of it dubious. If you search online, many recipes will tell you that this is the world’s oldest cake, with the first known recipe dating back to 1653. (Although the cake is said to hail from Linz, that early recipe was found in a document written in Verona, Italy). As it seemed unlikely that people began eating cake only four and a half centuries ago, I decided to look into the matter.

As it turns out, another of my favorite desserts, cheesecake, dates back to around 2000 BC, when it was enjoyed in ancient Greece, according to archeologists. Other forms of cake are still older. Pancakes have been dated to around 3300 BC, when Otzi the Iceman consumed them for what was to be his last meal. And corn-flour tamales filled with fruit are said to have been enjoyed by the ancient peoples of Central America as far back as 5000 BC.

So much for legend. What is certain is that linzertorte rose to fame from Linz, where one of the town’s museums has a permanent exhibit devoted to the cake. In an odd footnote to history, an operetta named ‘Linzer Torte’, by the German composer Ludwig Schmidseder, premiered in the town in May 1944, i.e. during the war. The town may have been chosen not just because of the cake but because Linz was Hitler’s childhood home…

Leaving history aside, linzertorte makes a wonderful addition to anyone’s culinary repertoire. It is fantastically delicious, and beautiful to behold. If you’re still thinking about your New Year’s Eve menu, it would make a very special dessert.