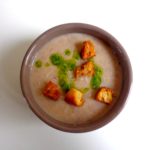 With the holidays behind us, it’s time for simpler fare. Rustic and wholesome, French white bean soup makes a fine January meal. Begin or follow with a salad, add some cheese and fruit, open a bottle of red and voilà. In this version, the soup is flavored with garlic, onion and rosemary. When I cooked up a pot of it on a recent gray Paris day, I topped the soup with a drizzle of herb-and-garlic infused olive oil and some freshly baked croutons.

This soup is a staple of French country cooking and comes in many guises according to region. In the northern half of France, some cream might be swirled in at the end. In the southwest, the soup might be topped with chorizo chips. You can cook the beans in water or homemade broth, as you prefer, and add some bacon to the pot for a smoky flavor. You can combine pinto beans and white beans, as I did in the soup pictured above.

Now for a little history. White beans, which are native to the Americas, have been popular in France since they were introduced by Catherine de Médicis of Italy after her marriage to the French king Henri II in the 16th century (so the story goes). What Anglophones know as navy beans, great northern beans or cannellini beans are often identified here by the region where they are produced: coco de Paimpol (Brittany), comtesse de Chambord (along the Loire), lingot de Castelnaudary (southwest), to name a few. This is largely academic for cooks, however, as any type of white beans can be used for making soup.

It has been gray for days in Paris, with no end to the clouds in sight. If you’re craving comfort food in this bleakest part of the year, here are some French winter classics: 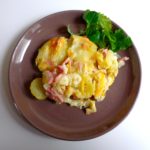 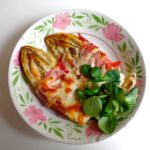 Here’s wishing you all a wonderful new year.