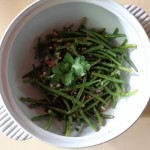 Fresh beans with walnuts, garlic and cilantro — if you have ever tasted this superb combination of flavors, you’ll probably always remember it. And you might even know that it’s one of the signature tastes of the former Soviet republic of Georgia. So what is it doing on a French cooking site? I have to admit that I love Georgian cuisine, so much so that I serve my favorite dishes often in France, especially in summer, when pungent salads and grilled meat, fish or veggies straight from the barbecue can make a perfect supper.

I had the pleasure of visiting the republic of Georgia twice in the 1980s while working for Reuters — once in the company of George Shultz and once with Margaret Thatcher. Never mind the politics or the visit to Stalin’s birthplace, the gorgeous countryside, Mediterranean climate or warm-hearted people. What knocked my socks off was the food. Melt-in-the-mouth khachapuri, a flatbread filled with melted sulguni cheese; salads of beets or spinach or dried red beans with garlic-and-walnut sauce; chicken grilled over  charcoal and served with a walnut-cilantro sauce or with tkemali sour plum sauce; fabulous soups and dumplings, and the list goes on.

I love making these dishes, and so do various friends who were also lucky enough to be posted to the former Soviet Union in its last years. At a time of momentous change, we feasted on life — and then there was the food, occasionally weird, often wonderful. I hope you will forgive The Everyday French Chef the occasional foray off the beaten path of typical French cooking. There are a couple of Georgian restaurants in Paris, but French chefs have yet to really discover the delights of Georgian cuisine. Until they do, I have no choice but to recreate these great dishes in my own kitchen.