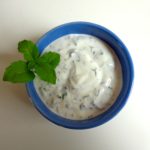 Dear readers of The Everyday French Chef: Normally I only post on Fridays, but today I am giving you a bonus recipe to compensate those of you who may have tried to access my site and instead found a blank page. Yes, you guessed right. My site was hacked again, and was down for about 24 hours. The problem is partially resolved now, allowing me to post this recipe for a delightfully light starter for a summer meal, or anytime of year.

Fromage blanc is found in various guises in different countries. It’s a fresh, smooth cheese which, as it’s name implies, is white (blanc). If it’s not available where you live, Greek yogurt makes a fine substitute. Fromage blanc is served in France either on its own, for example for breakfast, or as a dessert (maybe with jam, honey or chestnut purée added) or as a savory dish, like this one. The fresh herbs are chopped and added to the cheese along with a little salt and pepper, et voilà — a light and tasty dip for veggies or spread for bread.

And now let us turn from fromage blanc to the page blanche (blank page). I discovered the hacking problem yesterday upon my return to Paris from New York. When I tried to consult this site, I found an error message saying that the home page did not exist. All the other pages on the site appeared to be functioning. Today I called my host company, GoDaddy, and a very nice tech guy called Kyle informed me that someone had broken into the site and inserted a lot of extraneous pages with something called 64D code on them.

I had a question. Why would anyone do this? ‘Sometimes, just because they can,’ Kyle replied. But other times, the malicious coding can cause a page to redirect to another site, perhaps trying to sell something. When I got hacked in 2013, ads for ‘payday loans’ appeared on my site. I investigated this intrusion — after all, before becoming a food blogger I was a journalist, with experience in investigative reporting — and published a post on what I found. It turned out that the malicious intruders had links to Czech Republic, Russia and Germany.

So now I have been hacked again, in a different way, and the problem is not fully resolved because those extraneous pages — which readers do not see — are still lurking somewhere. I am working on the problem and hope it will be fixed by the time of my next post, on Friday. In the meantime, dear readers, if you encounter any issues when visiting the site, please let me know via the contact page.

Thanks, and happy cooking.