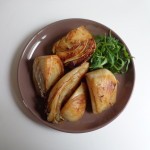 My friend Vera, a superlative cook, has lived all over the world. Bohemian by birth (Czech) and by nature (an adventurer’s soul), she moved from Prague to Paris to Montréal to Beijing to Jerusalem to Moscow to Berlin to London — and mastered the culinary styles of all. Now she is back in Paris, and I shouldn’t have been surprised the other night when she served a familiar dish with unfamiliar flavors. It was so fantastic I had to make it.

I’ve been serving braised fennel for years — a warming dish for cold weather. Ditto braised Belgian endive. What makes Vera’s combination of the two so unusual is her addition of herbs and spices, which lifts the dish from comfortable to zingily spectacular. The vegetables caramelize while braising and the flavors intensify with the addition of herbs from Provence, fennel seeds and hot cayenne pepper. ‘But is it French?’ I asked her. ‘Yes,’ she said, ‘but with a dash of Bohemia!’ By the way, she served it alongside a succulent blanquette de jarret de veau, a heartier take on the usual stew of veal in a creamy sauce. I plan to post a recipe for this classic French dish sometime this winter.

Now here’s some news. I learned two days ago that the much-heralded (on this site) Arte program about food and art has been postponed indefinitely, meaning that the episode where the great chef Georges Blanc makes his version of a Thanksgiving dinner à la Norman Rockwell — and where I make the cranberry sauce — will not be aired this month. In fact, the producers told me, that episode may not air until Thanksgiving 2014! Very unfortunate, although we can still be thankful that Monsieur Blanc provided us with the recipe for his fabulous pumpkin gratin, posted here two weeks ago.

On other fronts, the Everyday and Weekend Vegetarian Menus have been updated for fall, and I will update the menus for omnivores over the next week — promise. Also coming next week, I will tell you about my forthcoming memoir, Desperate to Be a Housewife, which will be published in late November. For a sneak preview, visit my personal web site, megbortin.com. In the meantime, happy cooking!