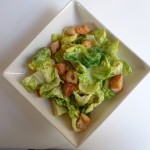 Is Caesar salad French? Many would say no. It was invented by Cesare Cardini, an Italian-American chef, at his restaurant in Tijuana. What’s so French about that? Ah oui, mes amis — but the defining characteristic of a Caesar salad is the dressing, and this dressing is essentially a French mayonnaise. Cardini’s addition of garlic and parmesan to flavor the mayo was a stroke of genius. Apparently it was his brother’s idea to add the anchovies. In any event, this rich and tangy salad has become a staple in Parisian bistros. It’s also one of my favorite lunchtime meals. I have been making it for decades. Here’s how.

Now then. Having made the argument that a Caesar is in some ways French, allow me to counterattack. In nearly 40 years in Paris, I have found only one restaurant here that makes a decent Caesar — and it’s an American joint, Joe Allen. The others fluff it, usually by using some ersatz version of Caesar dressing, often over any old kind of lettuce, rarely romaine. And the croutons! They taste like they came out of a box, bearing no resemblance to the crispy homemade croutons that give crunch to a true Caesar.

When I made the salad shown in the photo earlier this week, I had invited a friend to lunch. Little did I know that Adrian Leeds was a Caesar expert! She told me she had tried dozens of Paris establishments in search of the perfect Caesar, and had found one, in addition to Joe Allen, that does it right: Le Bistrot du 7ème. I’ll have to try that place.

When we lunched, I added grilled chicken to our Caesars. Steak, shrimp and salmon are also classic additions. But Leeds, who hails from New Orleans, told me about a kind of Caesar I’d never imagined before — with fried oysters on top. Deep-fried, one presumes. ‘It’s unbelivable!’ she said. Well, I’m not sure I’ll be trying that anytime soon in my Paris kitchen, although if I ever make it to New Orleans I’ll certainly give it a shot. Meantime, I’ll stick to my tried and true recipe, perfected over the years. Here’s Leeds’ verdict on our lunchtime Caesar, and I hope she meant it: ‘The best I ever tasted.’ Happy cooking!