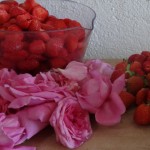 Can you imagine a more sensual tribute to spring than jam made of strawberries and rose petals? And the best thing about it is that you can open a jar in the deep midwinter and feel transported back to June. This delightful concoction comes to The Everyday French Chef from Lindy Sinclair, a master gardener and fabulous cook who divides her time between the rugged Ardèche region of southern France and London. It is this site’s first guest recipe.

Lindy and I first met in Moscow, where she had arrived from Australia to work as a journalist in the heady days just before the breakup of the Soviet Union. A versatile writer and reporter with an eye for the offbeat, she also wrote a regular cooking column for the newspaper I edited, The Moscow Times. In due course those columns were collected into Lindy’s first cookbook, The Wistful Gourmet (foodies were always wistful in Moscow in those days because ingredients were so hard to get hold of).

I am proud to have had a role in one of Lindy’s Moscow recipes. It was early spring and Lindy and I had been invited to the dacha of an acquaintance. When we went into his yard, we nearly tripped over the hundreds of huge dandelions growing in the grass. ‘Let’s make a dandelion salad!’ said I, and Lindy helped me gather up the lush leaves. We found some bacon (don’t remember how), made a vinaigrette and feasted on the salad that evening. One of these days I’ll give you the recipe for that kind of salad.

In the meantime, if you have access to roses, I highly recommend that you try this jam. It’s to die for. I know because Lindy served some to my daughter and me a couple summers ago when we made our way up the twisting road to her beautiful house and garden on a mountainside overlooking a valley. The countryside is wooded and hilly with spectacular granite outcrops and lush farmland. ‘This is chestnut and goat cheese country,’ says Lindy. ‘Perfect if you like hot summers but cold winters. And you get to play farmer in la France profonde (deepest France) but live only an hour’s drive from the cities on the Rhône.’

If you’d like to see more about Lindy, check out her web site, Fruitful Research. I’ll be back on Friday with my regular post. Until then, happy cooking!