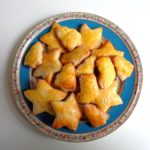 I had a surprise recently when a friend from Alsace presented me with a recipe for butterbredel, small butter cookies in festive shapes that are traditionally served over the holidays. They’re not just pretty but incredibly easy to make. And fun! You can get the whole family involved. There are many variations on the recipe, but this one is the real thing. It’s from a bakery in Saverne, a small town near Strasbourg in northeastern France.

Saverne has an interesting history. The town’s emblem is a unicorn — why, nobody knows, but the local beer is named in honor of the mythical beast:  Bière de la Licorne. It has apparently always been a drinking town. It was called Tres Tabernae — ‘three taverns’ — when Julius Caesar’s troops were there, and this evolved over time to Saverne. The town blossomed in the 18th century and acquired a sizeable Jewish population. It switched hands from France to Germany and back many times, most recently in 1940 when it was annexed by the Nazi regime. It was liberated and returned to France in 1944.

Butterbredel are enjoyed not just in Saverne but across Alsace throughout the Advent season, from early December until Christmas. A Jewish friend with family roots in Alsace told me that the cookies are enjoyed during the eight days of Hanukah too, and in fact throughout the year. They are traditionally small, cut into holiday shapes or rounds and decorated with a wash of egg yolk and milk that turns them golden.

While we’re on the subject of the holidays, this might be a good time to check out the Holiday Menus section of this site, which presents a variety of festive French meals and has just been updated. A traditional feast might feature oysters on the half shell or foie gras followed by roast partridge or turkey. There are variations from the farm, from the sea and, for vegetarians and vegans, from the land. Desserts range from chocolate truffles or pears in red wine to … you guessed it … butterbredel.

The Everyday French Chef will be on vacation over the holidays this year. I’ll be back on Friday, January 5, with a dynamite recipe I was given this week by the chef of a perfect bistro. Here’s wishing you and your loved ones a joyous year’s end. And…