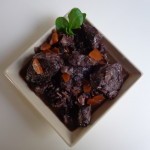 Is there any dish that more eloquently evokes French cuisine? Boeuf bourguignon is an ultimate classic, made even more famous outside of France by the 2009 film Julie and Julia, in which a young Brooklyn woman sets out to make every dish in Julia Child’s Mastering the Art of French Cooking, with boeuf bourguignon as the climax — or anti-climax, when Julie burns the stew. Like Child, Julie takes the attitude, as Columbia Pictures says, that ‘with the right combination of passion, fearlessness and butter, anything is possible.’ But — allow me a contrarian moment here — boeuf bourguignon is not a complex dish, and (pace Julia Child) it is traditionally prepared without butter.

I’ve been making bourguignon for decades, using the method most common in Burgundy itself (bourguignon translates as ‘from Burgundy’) in which various cuts of stewing beef are sliced into large cubes and sautéed with bacon, onions, garlic and a bottle of red wine. No pearl onions, no mushrooms — and no butter. I often add carrot slices, as they do in the region. Far from being a major production, it is a dish that takes no more than 20 minutes to prepare, with another 3 hours of stewing time on the stove top. No need to bake it in the oven and risk seeing your succulent stew turn into a carbonized mass.

Now a little history. According to my Burgundy cookbook, Cuisine en Bourgogne de A à Z by Amicie d’Arces, boeuf bourguignon was reserved for saintly feast days in centuries past. For the simple reason that fresh meats — beef, mutton and veal — could not be preserved in the manner of pork, and were served only on special occasions in peasant familes. The author writes that on Mardi Gras, people in the Morvan region of Burgundy used a branch from the previous year’s Palm Sunday to sprinkle their farms with sauce from boeuf bourguignon to ward off snakes! Such is the power of this dish. It’s magic.

Well, that was a long time ago and now boeuf bourguignon is regularly served throughout France — one of its most popular dishes. In fact, when you go to a French butcher to buy the meat for this stew, you don’t need to specify the cuts of meat. Just ask the butcher for ‘bourguignon’ and he’ll do it for you.

There are as many ways of making boeuf bourguignon as there are French cooks. My simple recipe reaches back in time to the most basic methods — and produces spectacular results. Others take a fancier route, with many variations: flame the meat in marc de Bourgogne (Burgundy-style grappa) or cognac, add juniper berries, cloves, tomato paste, leeks, whatever. In his recipe, the late, great Burgundy chef Bernard Loiseau used mushrooms, pearl onions and butter — along with balsamic vinegar and sugar! (Loiseau committed suicide in 2003 when it was rumored that his restaurant, La Côte d’Or, would lose its three-star status — a terrible testament to the pressure of being at the pinnacle of French cuisine.)

However you choose to make your bourguignon, it is a fine cold-weather dish that becomes even better when reheated the next day, accompanied — of course! — by a great French wine. Happy cooking.