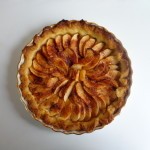 As American as apple pie? Maybe. But if I was asked to name the dessert I’d choose in a menu that best displays classic French cooking, it would certainly be tarte aux pommes. And as we are at the height of apple season, it’s the right time to offer you this elegant and ultrasimple recipe. Nothing to it. Make the pastry, pat it into your tart pan, peel and slice some apples, arrange them in pretty circles, sprinkle on some sugar, dot with butter, and there you have it. A classic French dessert.

Of course, there are many variations on this basic recipe. For example, tarte aux pommes Normande, in which the apples are bathed in a sweet creamy sauce that puffs up and turns golden while backing. Or tarte Tatin, in which the apples are cooked in butter and sugar before being loaded into their crust, and the tart is inverted when it comes out of the oven — it’s an upside-down dessert. You can sprinkle the apples with cinnamon, as shown in the photo above, although this is rarely done in France (I made that tart in a cooking class with Americans who wanted a cinnamon flavor). Or you can mix the apples with other fruit — pears, quinces, blackberries — to create something less typical. On the other hand, you can stick to the classic method and have your tart in the oven in a matter of minutes — five minutes to make the pastry, five minutes to prepare the apples, five minutes to assemble the tart. Once it’s on the table, I can guarantee you that your guests will take less than five minutes to finish off every scrumptious mouthful. Happy cooking!