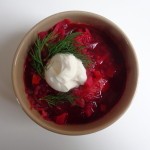 This is one of my favorite soups, a recipe I picked up after returning to Paris from a long posting in the USSR. But is it French? In a word, nyet. On the other hand, it’s ‘French style’ for a couple of reasons explained in the recipe. The original borshch hails from Ukraine, a place many of us have been thinking about these days as what appears to be a revolution unfolds before our eyes. I won’t make any predictions about what may ensue (hint: watch for developments as soon as Sochi closes down), but I will dedicate today’s post to the Ukrainians standing their ground against surrogate Kremlin rule.

Now let’s talk about borshch. If the word evokes a thin red liquid with bits of beet floating in it, then you’ve had the same sort of borshch that was served to me in my childhood in the States. But no, my friends, real Ukrainian borshch is totally different. It is loaded with vegetables — cabbage, carrots, onion, potatoes, sweet pepper, parsley, and of course the beets. It’s one of the healthiest starters around, and you can also make a meal of it, served perhaps with a salad and cheese. With wine or a couple shots of vodka on the side.

My personal history with borshch goes back several generations, to the great-grandparents on my father’s side who emigrated to America in the late 1800s. My great-grandma Sarah always said they came from Odessa, but in fact, I later learned, what she meant was that the boat left from Odessa. They lived further inland, presumably within the pale of settlement to which Jews were confined in those days. This was big borshch country, and although I was never served the real thing as a child I must have inherited some sort of atavistic food gene, for I recognized this soup as deeply familiar upon tasting it in the Soviet Union. The flavor is earthy, the colors magnificent. And it’s a soup for all seasons. Here’s to the future of Ukraine. And happy cooking.