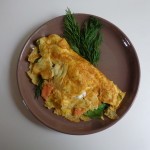 One of the keys to making a great omelet is having a great omelet pan. It doesn’t matter too much what it’s made of. I’ve used all kinds — cast iron, stainless steel, nonstick steel or aluminum. What you need is a pan that will cook the omelet evenly and allow the eggs to move around and slide out without sticking. And then, of course, you need great ingredients — like this combination of smoked salmon, spinach, cream and dill.

Getting back to the omelet pan, Julia Child recommends a plain iron pan of the French variety. We used that sort of pan when I worked as a chef in Ithaca, New York, at the Café Dewitt, where omelets were a specialty. I was surprised when I started there to learn that the omelet pan was never washed. Every day before the restaurant closed, the omelet pan would be salted and wiped clean with a paper towel. This ensured that we always had a seasoned pan ready to go the next day.

I’ve tried this at home, but my kitchen is small and there’s just not enough cupboard space to reserve one pan only for omelets. The solution? A high-quality nonstick pan. These didn’t exist when Julia Child wrote Mastering the Art of French Cooking, or she might have recommended one, too. They’re practical as they can be used for cooking many things, and washed. And they’re still ready to go when you want to make an omelet.

On other fronts, I attended an amusing event last week at the American Library in Paris — a discussion between Patricia Wells and Ann Mah on their approaches to food and cooking. Patricia Wells, one of my French cooking gurus, has just published a new book, The French Kitchen Cookbook. Ann Mah, whose book Mastering the Art of French Eating came out a couple of months ago, posted a funny account of the evening on her blog. Their verbal jousting elicited the surprising disclosure by Patricia Wells that she thinks it’s fine for French restaurants to serve frozen food. Well, not top-class restaurants, but ordinary cafés. This is a hot topic in Paris at the moment due to growing public anger over the practice by certain restaurants of serving reheated food that was prepared somewhere else. I’ve had the experience myself and, believe me, I was not impressed. Nonetheless, it’s a trend that has taken root deeply enough for the government to get involved.

Now, under a brand new law enacted yesterday, restaurants in France may label a dish homemade — fait maison — only when it is prepared using fresh ingredients. We should all applaud this measure, which by the way is less extreme than a previously proposed law, never enacted, that would have banned eating establishments from calling themselves ‘restaurants’ if they used any sort of pre-packaged food in their establishment.

After all, French cuisine is all about cooking with respect for the food being prepared — using the freshest ingredients, locally produced if at all possible, and taking the time necessary to create a superlative dish. It’s about cooking with love. And on that note, Happy Valentine’s Day. And happy cooking!

This entry was posted in 4. Omelets, Soufflés, Quiche. Bookmark the permalink.