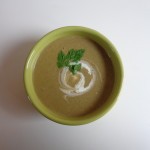 I’ve always loved sorrel, ever since first encountering it in France as a young woman. It’s fresh and lemony, a herald of spring, somewhere between an herb and a vegetable — the kind of plant women used to gather from the woods and turn into a lovely dish. Fresh sorrel is delicious in an omelet, makes a great sauce for fish and finds its supreme expression, perhaps, in a simple soup like this one, with a touch of cream to soften the sour edges.

Another reason why I love sorrel, or oseille as it’s known in French, is because I’m a bit of a linguist as well as a cook. As I discovered when I went to the movies one evening shortly after arriving in France in the ’70s, oseille means not just ‘sorrel’ but also ‘money’ in popular parlance. The name of the film? It was Woody Allen’s Take the Money and Run — or, in French, Prends l’oseille et tire-toi. Of course, French argot being a very rich language in its own right, sorrel is by far not the only food that connotes cash. Others include blé (wheat), beurre (butter), and radis (radish, used mainly when you’re out of dough, as in, Je n’ai plus un radis.) And speaking of dough, English, too, has its stock of food terms that connote money: bread, cabbage, clams, lettuce, to name just a few. If you have more examples, including from other languages, please send them along.

This entry was posted in 2. Soups and tagged recipe, sorrel, soup, soupe a l'oseille, vegan. Bookmark the permalink.