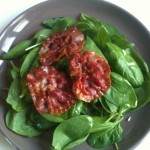 I often find myself craving this salad as winter sets in. The deep green leaves of the spinach topped by crispy brown pancetta look so appealing on the plate. The sauce of lemon, olive oil and garlic is so tangy it knocks your socks off. But it isn’t just esthetics and flavor that make us desire this sort of salad when the weather turns cold. Spinach is packed with vitamins and iron, lemon has Vitamin C, olive oil is said to lower the risk of heart disease, and garlic — used by humans in cuisine for at least the last 7,000 years — has been variously credited with warding off the common cold, lowering cholesterol and preventing certain kinds of cancer. Et voilà — a delicious winter salad that is also good for you!

For any readers who may be interested in food history, I’d like to invite you to take a look at the recent contributions of Professor Luciano Granozzi on the origins of a recipe I posted on this site in September, proscuitto with figs. You can find this under Starters on the recipe page for Jambon de pays aux figues. Il dottore Granozzi, who teaches history at the University of Catania, questioned the national origins of the dish — Italian or French — and when I challenged him to tell us more, he found a hilarious text about the possible inventor of the fig-and-ham combination. I have done my best to translate the gist of it. 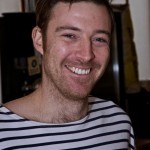 Coming tomorrow: The Everyday French Chef will launch the first in a series of interviews with chefs at some of my favorite Paris restaurants. The series begins with Shaun Kelly, the 28-year-old chef at Au Passage in the 11th arrondissement. A self-described former punk rocker, he has transmuted his musical energy into a modern, exciting culinary style. Not to be missed.