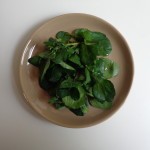 Crisp, peppery, dark green and packed with vitamins, watercress can be grown all year round and makes a wonderful winter salad. It is most often seen in Paris as a garnish to meat dishes, with no dressing. But it takes on star quality if dressed with a sauce of oil, lemon and just a little salt. I can still remember how surprised I was by its sharpness when I first tasted it, just after moving to France. It made me wake up and say, ‘More, please!’

Watercress may be cultivated today, but it also grows wild along riverbanks — and people have been eating it pretty much since the dawn of humanity. It is well loved in cuisine: the watercress sandwiches of England are delicious, and the plant’s pretty green leaves make a fabulous soup (coming soon). But watercress just on its own has been credited with almost magical powers over the years. The Romans thought it could cure baldness, the Greeks believed it could cure madness, and Dioscorides, a first century pharmacologist, prescribed it as an aphrodisiac. Who knows? He may have been right. Try it and see.

This entry was posted in 3. Salads and tagged cresson, recipe, salad, salade, watercress. Bookmark the permalink.