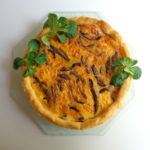 The other day I wandered into a local lunchtime place and was served the most delectable quiche I’d tasted in a long time. Both light and rich, it veritably hummed with the flavors of spring — in the form of green asparagus and oyster mushrooms. The place was the Rose Bakery. I wrote to them to ask for the recipe, but they didn’t reply. Never mind. I made it anyway.

Usually I use milk in a quiche filling, often with a sprinkling of grated cheese, but those flavors were absent in the original. To replicate its melt-in-the-mouth richness, I used just cream and eggs, with a little salt and black pepper. The result? Tasty!

The Rose Bakery, which is run by a British-French couple and has been around for more than a decade, won plaudits when it first opened in Paris. It is similar in style to Moosewood, the flagship American gourmet vegetarian restaurant in Ithaca, New York, where I worked as a substitute chef in the 1970s. The foodie site Paris By Mouth has since dropped Rose from its list of its 350 favorite restaurants in Paris. No reason was given, but rudeness would be top of my list.

No restaurant can be expected to share a recipe, although many do so willingly. I was once politely refused a recipe at Merci, the very cool three-café restaurant across the street from me on Boulevard Beaumarchais. But I do believe that a request should at least receive the courtesy of a reply. And speaking of rudeness, my friend Nicole and I had not originally set out for Rose when we met for lunch that day. We first stopped in at Rachel’s, another trendy Anglo-style place in the neighborhood, but left when they refused to seat us at a proper table, instead insisting that we lunch at a tiny square wedged in beside the door that lacked enough space for two plates…

All of this is happening in a neighborhood of Paris that was totally lacking in chic until a few years ago. The trend started with the arrival of some art galleries and Merci — which also has a huge clothing and furniture emporium. Now the boulevard is lined with expensive clothes stores (Sandro, Kitsune, Melinda Gloss) and bobo (bourgeois bohemian) restos (Grazie, Fisch, Blend). The high note came last spring when the gourmet deli Maison Plisson opened its hallowed doors directly across the street from my apartment. On nice days, ladies who usually lunch in Left Bank neighborhoods come slumming over here to sit at Plisson’s outdoor tables.

Only a few blocks away, other Parisians are currently spending their nights protesting at the Place de la République in the movement known as Nuit Debout, the French version of Occupy. Hundreds were at the square last night when President François Hollande went on TV for a so-called dialogue with citizens about the accomplishments (or not) of his term in office. A giant outdoor screen was set up on which the protesters watched the two-hour spectacle of Hollande being hammered over everything from excessive taxation of small businesses to recruitment of terrorists at Islamist schools to the state hand-outs being given to hundreds of migrants in the depressed Calais region who are waiting, mainly in vain, to make their way to Britain. Things turned violent when youths enraged by the broadcast set out to march on the Elysée — the French presidential palace — and began smashing store windows, cars and bus shelters en route, prompting intervention by the CRS riot police.

What does all this have to do with quiche aux asperges? Just as asparagus is a rite of spring, so is protest in the streets of Paris. This spring promises to be particularly hot given the political climate change enveloping France. People are angry across the spectrum. Standards of living have declined significantly for many — not the clients of Plisson, of course, but working people living on 38 euros a day, the current minimum wage, or on even less among the ranks of the un- or under-employed. The Nuit Debout movement lacks the revolutionary humor of the May ’68 student-worker protests (‘It is forbidden to forbid’, ‘Beneath the cobblestones, the beach’). Its spirit is just plain tense at a time when tensions are already high following the terrorist attacks of last year and the anti-Europe, close-the-borders feelings they have elicited.

Living within a stone’s throw of the current protest’s nerve center, I find that retreating into the kitchen is a way of remaining zen. Make a quiche, open a bottle of wine, and hope that the embattled leadership of this country will find a way to meet the present challenge.