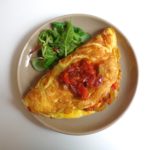 This tangy omelet hails from the French Basque country and is filled with the regional veggie dish known as piperade, a mixture of green peppers, tomatoes, onion, garlic and pepper slowly sautéed in olive oil until it reaches aromatic, spicy perfection. This is a good time of year to try it out, when peppers and tomatoes are at their prime. Unsuprisingly, the omelet is also known as omelette à la piperade. It makes a nice lunch or a light supper.

Piperade takes its name from the regional word for pepper, pipèr, and traditionalists may try to tell you that only one type of green pepper will do — piments d’Anglet, which are grown in southwest France and are thinner and more tapered than standard bell peppers. But that is poppycock, in my opinion. The difficulty of finding piments d’Anglet outside the Basque region ensures that green bell peppers are generally used in Basque cuisine throughout the rest of France.

There are many variations on the recipe for a Basque omelet, which itself is sometimes known simply as piperade. Some recipes omit the garlic, which I view as essential. Many include piment d’Espelette, another regional ingredient — it’s somewhat akin to paprika, made of ground, sun-dried, rather mild red peppers. Black pepper or cayenne may be substituted. Often the omelet is served with lightly fried country ham alongside. Julia Child goes so far as to mix country ham in with the veggies — highly unorthodox!

As for the piperade, it is a bit like ratatouille, minus the eggplant and zucchini, and may be served on its own, alongside grilled meat, poultry or fish, or as a topping for pasta. A restaurant I used to go to near the offices of the International Herald Tribune served piperade alongside cod bathed in a delicious beurre blanc — a great combination.

Meantime, as we head into the new school year, I’d like to mention a site that has been a major promoter of The Everyday French Chef, which is given top billing on a page titled ‘9 Cooking Blogs to Follow for Amazing French Recipes‘. The site, takelessons.com, is currently offering live online French classes, with a 30-day free trial period. If you’d like to brush up your French, or want to dive in for the first time, this might be a good place to go.