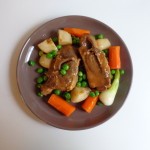 Navarin, or lamb stew, derives from the French word for turnips — navets — which turn up (pun intended) in colorful bunches in outdoor markets every spring. Their appearance heralds not only the return at last of warm weather, but also the arrival of a seasonal dish that is doubly heartening. For navarin may be as warming as a winter stew, but its spring vegetables display the promise of warm summer days soon to come.

We made a navarin in cooking class the other day and it took just over an hour. Stewing time, of course, depends on the cut of lamb you use. The version shown above is my favorite, with turnips, carrots, spring onions and fresh peas. But many other variations are possible. Julia Child’s recipe also calls for green beans and potatoes, but I find that results in a heavier dish akin to Irish stew, losing navarin’s light touch of spring in the process. 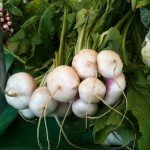 As for turnips, they had bad rep in my family when I was growing up in the States. Why, I can’t understand. The turnip is a delightful vegetable, easy to grow in a garden plot and spicy enough to add zing to a stew or salad. Turnips were apparently first cultivated in India some 3,500 years ago, and today feature prominently in North African and Middle Eastern cuisine. They also have a long tradition of culinary and other uses in Europe. Nonetheless, their bad rep clings to them over here, too. In France, at least, where a movie or play that bombs is called not a lemon but un navet…

Book news: ‘Mastering the Art of French Eating,’ a new food memoir by the author Ann Mah, is now available for pre-sale ahead of its publication in September. The book is a regional tour of France and its culinary traditions undertaken by Ann when her husband, a diplomat, was suddenly transferred to Baghdad, leaving her on her own in Paris. It includes recipes from each of the regions visited, as well as Ann’s musings on food, life and love. Cannot wait to read it myself!