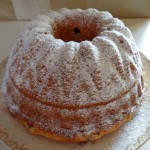 We’re nearly into the holiday season and to mark the occasion here is a cake from Alsace, kouglof, which according to one legend is shaped like a turban of the Magi. Not to imply, however, that this is a Christmas cake. It is consumed year-round, for breakfast or at tea time, according to Andrée Hentz, who kindly contributed the recipe. The mother of a friend, she says her family has been in Alsace, on the northwest edge of France, for hundreds of years. They live in a village west of Strasbourg. And they have been making kouglof all that time.

There are versions of this cake in Austria and Bavaria as well. So how did it get to France? For one thing, says Madame Hentz, after the Thirty Years War (back in the 1600s, but of course you remembered that), a third of the population of Alsace had been wiped out and their villages burned to the ground. Once the war ended and the region reverted to France, it was repopulated, and the new arrivals brought their culinary traditions with them. So when Catholic Austrians arrived, for example, they said of the Alsatians, “Let them eat cake.” (Just kidding.) According to another story, Marie-Antoinette, the Austrian princess who married the future Louis XVI of France, liked kouglof so much that she introduced it to the French court. Whichever is true, you will enjoy yourself royally if you attempt this cake, which admittedly takes a bit longer to make than most recipes on this site — but has the advantage of being copious enough to last for breakfast all week long.

This entry was posted in Desserts and tagged Alsace, cake, kouglof, recipe. Bookmark the permalink.