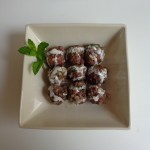 We’re heading south for the summer. On Tuesday, it was Provence. Today it’s the Mediterranean coast, for the spicy, herbal grilled ground-meat sausages or meatballs known here as kefta. But are they French, you may well ask? Originally, no. Kefta and variations thereon have been made for centuries around the Mediterranean rim, from Morocco to Egypt, Lebanon, Syria, Turkey and the Balkans. In Paris, they appear on the menus of ethnic restaurants — and now also turn up on occasion in classy French bistros.

I love making kefta because it’s the kind of dish you can really get your hands into — literally. You add the spices and herbs to the ground meat and plunge in with your hands, blend it all together and form it into homemade sausages or little balls, just like women did throughout the many thousands of years before the invention of the Cuisinart. And the preparation takes less than 5 minutes! It’s the kind of very quick dish my friend Ann Mah likes to feature on her blog’s Tuesday Dinner page.

Kefta are best grilled on a barbecue, and if you have one, go for it. But as that is not a feature of most urban kitchens, there is another solution. Roast the kefta in an oven so hot that you obtain a tandoori effect. They meat will be browned on the outside and tender and juicy on the inside. You can serve them on their own, or drizzled with tahini sauce, as shown above. With a couple of Mediterranean salads and some fresh herbs alongside, it’s a perfect dish for summer.

This entry was posted in 7. Meat Dishes and tagged kefta, recipe, spicy meatballs. Bookmark the permalink.