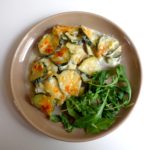 Zucchini infused with thyme, garlic and nutmeg and topped with a crust of bubbling cheese — it sounds as good as it tastes. But the best thing about this dish is how easy it is to make. In the time it takes to heat up the oven, you can steam the zucchini, grate the cheese, combine the cream and seasonings, and presto — it’s ready to bake. You may need to double or triple the recipe, because it will have your happy diners clamoring for seconds.

The gratin is a staple of French cuisine but every chef has a different way of preparing it. Which means you can use your imagination to create variants of this dish — experimenting with different cheeses, for example, or combining the zucchini with another vegetable.

A word on cheese. My friend Ann Mah, an elegant writer on food and travel, has a new feature on her web site every Tuesday in which she invites another food blogger to share his or her midweek cooking secrets, most recently David Lebovitz. Through this feature I discovered Chez Loulou, a site that includes a terrific guide to French cheese. France reputedly counts a cheese for every day of the week — as De Gaulle famously said, ‘How can you govern a country that has 365 cheeses?’ In fact there are many more French cheeses than that, making a guide both interesting and useful.

The gratin may be served as a side dish or as the main dish of a light meal, preceded or followed by a salad. It will marry well with a sturdy red wine.

This entry was posted in 8. Vegetables and tagged courgettes, gratin, zucchini. Bookmark the permalink.