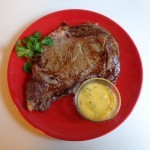 This is not an everyday dish because it involves a sauce, béarnaise, that requires a little time and a bit of technique. The results, however, are spectacular. Choose a tender, flavorful cut of steak. Sirloin, rib-eye, Porterhouse, club and New York strip make good substitutes for the French entrecôte, which is cut from the rib area. French restaurants often serve the steak grilled, which is unfortunate because the meat acquires a charred flavor. It should be pan-seared or broiled, with the sauce served alongside. Ah, the sauce!

Béarnaise is creamy perfection. An emulsion of egg yolks and butter flavored with vinegar, shallots and tarragon, it is classified as a derivative of hollandaise on the French list of master sauces, and is equally rich. In fact, between the steak and the sauce, this dish is packed with cholesterol. But not to worry, as entrecôte béarnaise is one of those French paradox dishes. Match it with a sufficiently tannic red wine, preferably a great Bordeaux, and any negative health consequences simply melt away (or so they say).

It would be justifiable to think that béarnaise sauce comes from the Béarn region in the Pyrénées of southwest France, but that turns out to be wrong. The sauce was invented in 1837 by Jean-Louis-François Collinet, the chef at a restaurant outside Paris that was a former royal residence of the 16th century French king Henri IV. Collinet whipped up the sauce on the spur of the moment. Asked for its name, he saw a bust of Henri IV in the dining room and dubbed the sauce béarnaise — because the king had been born in the Béarn region! There are various derivatives of béarnaise, among them sauce choron (flavored with tomato) and sauce Colbert (flavored with meat glaze and white wine). Once you get the hang of it, a fine béarnaise can be produced in less than 10 minutes. It’s fun, and so rewarding to see the ingredients transmogrify into a perfect sauce.