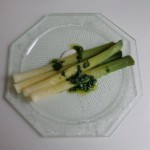 The leek is a handsome vegetable. The ancient Egyptians grew and enjoyed it, and so did the Romans — in fact, it was reputedly Nero’s favorite vegetable. The Welsh enjoy it so much that they made it their national emblem. Milder than the onion, the leek makes frequent appearances in European cuisine, notably in France and Belgium. So why are leeks so rarely seen in American cooking? One person here in Paris who’s not afraid of leeks is Shaun Kelly — but he’s Australian, not American. At his restaurant, Au Passage, he made a leek starter the other day that was so delightful I had to try to replicate it.

Leeks are also delicious served as a starter with mustard vinaigrette and many other sauces — or just with sea salt and a fine extra-virgin, cold-pressed olive oil. But this herbal sauce adds a little je-ne-sais-quoi that lifts the leeks out of the ordinary. As the leek is a winter vegetable — and spring finally seems to be around the corner — the time to try this dish is now. Leeks won’t be on the menu for long. Happy cooking!