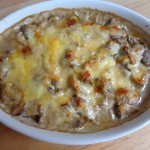 This dish of sliced mushrooms in a creamy, cheesy sauce is something I discovered while living in Moscow in the 1980s. In Russia, where it is known as zhulien, it is often served during intermission at theaters in little individual long-handled pots with a tiny spoon. Sometimes chicken is added to the mixture. I have not yet managed to track down the Russian history of this recipe, but it is clearly French in origin, as its name derives from the fact that the mushrooms are sliced julienne-style. Most likely it was introduced in the 1800s, when French chefs were brought north to cook for the tsars. So from Paris to Petersburg and back to Paris, where I occasionally make it, much to the delight of my guests.

Russians, perhaps the world’s greatest mushroom hunters, especially love wild mushrooms, like chanterelles, which enhance this dish with an earthier taste than the cultivated variety. But as the chanterelle season is relatively short, the dish is most commonly prepared with cultivated white mushrooms, and flavored with dill or cilantro, two of the most popular herbs among Russians. In the photo above, the julienne was made with a mixture of shiitake and white mushrooms. The shiitake, readily available in French markets at this time of year, add additional flavor and texture to the dish. I used a medium-sized gratin dish, good for family suppers, but individual ramekins make a fine impression if you have guests gathering around your table. When serving a Russian-style feast, I would most probably present the julienne — in very small individual quantities, as it is quite rich — after a starter and before the main course.

This entry was posted in 8. Vegetables. Bookmark the permalink.