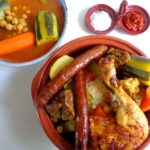 When the French are asked to name their favorite dishes, couscous invariably comes near the top of the list. And why not? This import from North Africa is delicious, economical and healthy. The fluffy semolina grain forms a bed for veggies and chick peas cooked in a rich broth flavored with mildly exotic spices. Then along comes your choice of meat, poultry, spicy sausage, fish or a combination, as in this ‘royal’ version.

If you’ve never encountered couscous, or even if you have, it’s important to note that the word has a dual function: ‘couscous’ the grain and ‘couscous’ the dish. I have prepared couscous the grain thousands of times to use as a side dish for meat, fish or game, or as a breakfast cereal with butter, sugar and cinnamon, but have relatively rarely made couscous the dish, which is readily available in restaurants here and is a bit of a production to prepare at home. Nonetheless, home cooking allows you to be creative in your choice of ingredients and to spice the broth as you desire.

The ‘royal couscous’ featured here, with a mixture of meats, is a French take on the original, which became a fixture of the French culinary repertoire after the country’s North African colonies gained independence in the mid-20th century. There are many regional variations. In Algeria, the broth may be made without tomatoes (clear) or with (red), while in Morocco and Tunisia it is typically red. Morocco uses spices such as saffron, ginger and cinnamon to impart a subtle flavor, while fish couscous is popular in Tunisia and Algerians often add broad beans. Beyond these generalities, every community has its own speciality, and sweet couscous with almonds or raisins is a popular dessert across North Africa.

According to Wikipedia, the French had tasted couscous by the 16th century — Rabelais mentions it his novel Pantagruel — and the dish gained ground in southern France during World War I when Algerian workers were sent north to replace French soldiers called away from their factories to the front. It became a nationwide phenomenon when pieds-noirs, or ethnic French born in North Africa, surged north at the end of the Algerian War in 1962 for fear of reprisals, bringing the local cuisine with them.

Today there is no contesting the popularity of couscous among the French. In a recent major poll on favorite dishes, couscous came in third, after magret de canard (duck breast) and moules-frites (mussels with French fries), and ahead of such classics as blanquette de veau (veal stewed in cream), côte de boeuf (thick rib steak) and leg of lamb.

I am delighted to be able to say that recipes for versions of most of the top 10 are already on this site, the main exception being French fries (coming soon). Here’s the list:
1) Magret de canard
2) Moules-frites
3) Couscous
4) Blanquette de veau
5) Côte de boeuf
6) Gigot d’agneau
7) Steak-frites
8) Boeuf bourguignon
9) Raclette
10) Tomates farcies