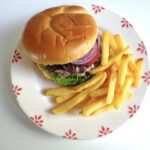 Duck has always been a big deal in France, culinarily speaking, and what with the popularity of a certain American import it was inevitable that the French would put their own twist on it and create the duck burger. Some recipes use confit de canard, or preserved duck, but most use the magret, or breast. In this one, a magret is chopped by hand, pan-fried or barbecued and topped with caramelized onions in a honey-mustard-thyme sauce.

Hamburgers barely existed in France until 1972, when McDonald’s opened a branch outside Paris. Before then, Wimpy had a few outlets in Paris. I had the dubious pleasure of lunching at one back in 1969. Their hamburger was a barely edible thin leathery patty. But going there was still a kick because with your burger you could enjoy a glass of rosé, something unheard of at hamburger chains in the States. It wasn’t until the arrival of McDonald’s that the French took to burgers, and now they’re everywhere.

You can find the classic American (thick and juicy) beef burger in most Paris bistros these days. A popular French version tops the classic with foie gras. The gourmet chef Yannick Alléno, who boasts three Michelin stars, opened a burger joint with his son that features a veal burger with tarragon butter, parmesan, caramelized onions and basil. We have vegan burgers, bao burgers, Waygu beef burgers, crunchy salmon burgers, etc., generally served with French fries but sweet potato fries are on the rise. For my money, the best burgers in town can still be found at Joe Allen, where I’ve been enjoying them for nearly 50 years.

But getting back to the making of duck burgers, the trick is to include some of the fat from the magret — otherwise, your burger will be dry. (Not to worry, because most of the fat melts away during cooking.) The duck burgers may be pan-fried or (better) grilled over charcoal, if you’re lucky enough to have access to a barbecue. I serve the burgers on toasted buns with the caramelized onions, lettuce, tomato, sliced red onion and my own spicy burger sauce. You can do the same, or be as inventive as you like.

This entry was posted in 6. Poultry and tagged burgers, duck, France, recette, recipe. Bookmark the permalink.