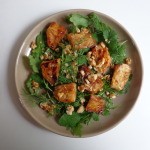 Celeriac, although seen infrequently elsewhere, has long been a staple of French cuisine. When I first arrived in Paris, it appeared most regularly on the mixed veggie plate called assiette de crudités, grated and bathed in a mustardy remoulade sauce. These days chefs both here and abroad have become more creative and are using this versatile vegetable in many ways. For example, caramelized on a bed of greens sprinkled with walnuts.

To be honest, the inspiration for this dish came not from France but from a column by the New York Times food writer Mark Bittman, who wrote in September about a swing through London where he visited four hot new restaurants. Among them was Chiltern Firehouse, where the Portuguese chef Nuno Mendes (formerly of El Bulli) was presiding over the kitchen of a place billed by the Daily Telegraph in July as London’s ‘hottest celebrity hangout.’

There was no photo, just a description: ‘Planks of sweetly caramelized roasted celeriac are served with walnuts, onions and greens.’ I decided to give it a try, skipping the onions and serving the dish on plates instead of planks, drizzled with a few drops of balsamic vinegar and some first-cold-pressed extra virgin olive oil. For greens, I used arugula, dill, mint and cilantro. Given how quickly my guest and I finished it off, it seems it was a success.

Veggies, nuts and olive oil brought together in a succulent combination: this dish, like many others on this site, may be enjoyed not just by omnivores and vegetarians but also by vegans. As we head toward winter, I have updated the Menus section of the site with new everyday and special day menus for all. Take a look, if you like, and use these menu ideas as inspiration for your own selection of dishes.

Inspiration — that’s the name of the game in the kitchen these days. You don’t need to be Nuno Mendes to come up with a winning idea that translates into plaudits at the table. You just need some good ingredients and a spoonful of creativity. Happy cooking!