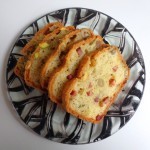 Guests are coming and you’d like to do something really special for a festive cocktail hour? This rich and savory apéritif cake, studded with olives, bacon and pistachios, will knock their socks off. I discovered it a couple of weeks ago when invited to dinner by my friend Valérie, a transcendent cook whose recipes have appeared on this site before. She served it with a dry white as guests gathered beside the fire in her casual/arty Paris apartment.

Since readers have been asking me lately to describe the order of dishes in a typical French meal, I thought I might share with you the dinner that Valérie prepared. (Of course, her dinners are anything but typical. But the dishes came along in the usual order).

We began around the fire with the savory cake, wonderful tarama she had picked up at a neighborhood bistro, Le Taxi Jaune, and thinly sliced saucisson sec, the dried French sausage that looks like hard salami but tastes completely different. When we repaired to the table, Valérie served as a first course une crème de choufleur — not a soup but a satiny purée of cauliflower, blended smooth (she later confessed) by the addition of cold butter.

The main course was a seven-hour leg of lamb, meaning that it had been roasted at low temperature for … seven hours, resulting in ever-so-tender slices, served with sliced carrots that had been in the roasting pan, slow-cooked turnips and leeks, and potatoes baked in their jackets. Too much of a good thing?

No, because we went on to a salad of tender leaves and a spectacular cheese platter, with pungent Saint Nectaire from central France, a goat cheese, a fruity Comté and — imported from England — Stilton. And yet there was more to come…

At this point, I must admit, I was feeling like I couldn’t take another bite. But out came the dessert — a vanilla cream with truffles, served in deep small cups — and as the oohs and aahs erupted around the table, I dipped in my spoon. Pure bliss.

Valérie’s husband, Philippe, has the accent of southwest France and is well-versed in the products of that sunny region. He served a variety of regional reds with the various courses. When we’d had the last drop, we returned to the fireside for more conversation and a welcome pause. But then they brought out the chocolates…

The damage? Two kilos, according to my bathroom scale the next morning. But it was worth it. A couple days of cabbage soup, and the kilos had melted away.