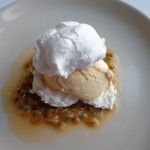 Ethereal, sweet, light as air, meringues make a lovely dessert in various guises. In France, when meringues are combined with whipped cream, ice cream or both, the dessert is called vacherin. Julia Child explains how to make a large ice cream vacherin using three large concentric rings of meringue. In this simpler version, individual meringues filled with vanilla ice cream and whipped cream are set on a coulis, or sauce, of lightly sweetened passion fruit. I first tasted this dessert at Spring, the Paris restaurant of Daniel Rose. His creation was so heavenly that I had to try to replicate it at home.

Meringues have been served as a gourmet dessert in France for about 300 years and came into their own in the early 1800s, popularized by Antonin Carême, chef to kings, nobility, diplomats, bankers and even a tsar. Carême used meringues to garnish  fabulous almond-paste constructions of Greek temples and other monuments. Early in his career, possibly with Talleyrand as his sponsor, he sold large meringues out of a pastry shop on Rue de la Paix. I know this because I’ve just finished reading Carême’s rags-to-riches story, as told by Ian Kelly in a biography called Cooking for Kings (Walker, 2003). It’s a book I would recommend highly, not just for the engaging narrative but also for the many recipes it includes. They amusingly demonstrate how much French cooking and tastes have evolved in the last two centuries — and how much simpler our recipes have become. Carême’s recipe for ‘Apple Meringue as a Hedgehog,’ for example, calls for 40 apples that must be cored, peeled, boiled in syrup, and rubbed through a sieve or stuffed. The meringue, used as a topping, is a mere afterthought.

Site news: The ‘Menus’ section of this web site has been updated, with new winter menu suggestions for every day and special occasions, and new menu pages for vegetarians and vegans. I have also expanded the ‘Your Kitchen’ section with a photo catalogue of useful cooking equipment as exemplified by the equipment in my Paris kitchen. Coming soon: The site’s first 2 how-to videos.