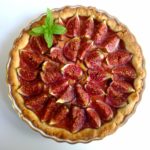 Pretty as a picture. That’s what my daughter said when this tart of fresh figs set on vanilla-flavored cream came out of the oven the other day. She posted a photo on Instagram and got, like, a jillion likes (so she said). That evening I took the tart to a friend’s birthday dinner where it was speedily consumed with evident satisfaction — all the more so since this elegant dessert can only be made when figs are in season, a few months a year.

The good news is that, once you get hold of the figs, the tart is quite simple to prepare. You make a buttery pâte sablée — or go buy a roll of sweet pastry dough if you’re in a rush (shh! I didn’t say that) — then mix together cream, an egg yolk, sugar and vanilla, cut up the figs, assemble the 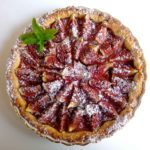 tart and pop it in the oven. When it comes out, you can add a sprinkle of powdered sugar if you like.

My love affair with figs began many years ago when I spent a summer in France for the first time. Growing up in Wisconsin, I never saw a fresh fig. They didn’t grow there, and they weren’t imported. Imagine my surprise one day when, walking to class in Avignon at the age of 19, I followed my nose to an enticingly musty aroma that turned out to be emanating from a shrublike tree, its boughs heavy with fresh figs. Checking to see no one was looking, I picked one and tried it. Pure bliss.

Fresh figs — robed in violet, green and shades in between — can be found at farmers markets in France from July to October, and the season is extended these days by imports from Turkey and North Africa. Most French figs are grown in Provence and the neighboring Languedoc-Roussillon region. A few summers after my stay in Avignon, one of the loveliest towns in Provence, I spent a month at a friend’s country place in the hilly Cévennes region just to the west. There was a fig tree in the garden, and its profusion of fruit inspired us to make jar upon jar of fig jam. (I’ll post that recipe one day.)

Many years later, I thought about planting a fig tree in my garden in Burgundy, but locals said it wouldn’t thrive due to the cold rainy winters. What with climate change, however, fig trees are popping up these days beyond their native Mediterranean region — in northern France, Germany and even in England. They’re also grown in California, much of Asia and Australia. So, with any luck, you’ll find a source of fresh figs nearby. If you do, snatch them up, take them home — and enjoy creating a beautiful tart.

This entry was posted in Desserts. Bookmark the permalink.