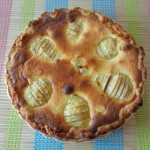 Pear tart with almond cream is also known in France as tarte aux poires Bourdaloue. It takes its name from a former Paris pastry shop called Bourdaloue, named for the street on which it stood, the Rue Boudaloue in the 9th arrondissement, which is named in turn for Louis Bourdaloue, a 17th century Jesuit priest renowned as a brilliant preacher. Marcel Proust was reputedly fond of Bourdaloue’s tart and wrote about it in one of his books (the name of which I have long since forgotten — if anyone out there has the reference, please let me know). Many years ago a Frenchman who was to become important to me brought me a tarte aux poires Bourdaloue as a first step toward seduction. I have been in love with this tart ever since.

The pastry shop no longer exists, alas. It has morphed into a bakery of another name, and while the shop still retains the Bourdaloue awning, do not be deceived — its pastry bears no resemblance whatsoever. I recall my first Bourdaloue pear tart as meltingly sweet and creamy, with the silky smoothness of the almonds contrasting enchantingly with the slightly tangy resistence of the fruit. Okay, fair enough. I was high when I tasted it — high on wine, high on anticipation, high on the almost certain knowledge that I was falling in love. It’s enough to make anyone go crazy for a tart. Happy cooking!