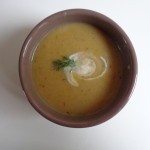 Soup, glorious winter soup. The glory being that it’s so simple to make — two leeks, one potato, a little broth and that’s it. A peasant approach to a winter’s supper. And yet, and yet. What lifts this soup out of the ordinary is the manner of cooking the leeks. They are sautéed until they turn a deep golden brown, intensifying their natural sweetness into a rich caramelized flavor. When blended, the browned leaves of the leeks add dark flecks of texture to the velvet of the soup. Simple, but complex. Sophisticatedly satisfying.

Being a winter vegetable, the leek comes into its own in January, when the sweet peas of spring and red ripe tomatoes of summer are but a distant memory. I usually pick up some leeks at the market on Sundays, and decide how to use them as the week rolls along. This week I had been planning to use my leeks in a quiche to put on this site — but when I opened the vegetable bin the other day they seemed to be calling to me: ‘Soup, soup!’

As it turned out, the leeks were right. One of the main things I’ve learned about cooking is that you need to follow your instincts. I had never made this soup before. Just created it on the spot. When my daughter got home from school, she let out a little whoop of joy when she saw the soup. The recipe says it serves 3-4 but that may be a wild exaggeration. The two of us finished it off in one sitting, with seconds all around. Happy cooking!