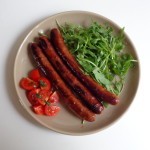 Let’s face it — the everyday French chef cannot concoct a major feast every day. There are school nights, work nights, nights when you’re planning a rendez-vous with your lover… Sometimes it’s just a matter of opening up the fridge to see what’s available, and then using your creativity. The result can be a 20-minute supper that’s as tasty as it is simple. For example, spicy merguez sausages accompanied by a salad of arugula with balsamic vinaigrette dressing — and if you like a little couscous on the side.

I fell in love with merguez way back in the late 1970s when I hadn’t been in Paris all that long. The occasion was a trip to the Montreuil flea market — on the eastern edge of Paris, and more manageable than the sprawling market at Clignancourt. I got into an argument with Jean-Pierre, a friend who went out there to look for some funky old furniture with me and my boyfriend. There was a little café that served merguez-frites where a guy in a beret played the accordion, and that’s the place where I had my first taste of these wonderful sausages. Anyhow, Jean-Pierre said the word merguez was not in the dictionary because it wasn’t French. I begged to differ, insisting that the sausages — which originally hailed from the French colonies in North Africa — had become so prevalent on the mainland that they must have been integrated into the language. On arriving home, I checked my Petit Robert dictionary and saw I had lost the bet. But if Jean-Pierre was right about that, he was wrong about another thing. He swore merguez were made from donkey meat. That may have been the case in the past, but now the merguez sold commercially in France are generally made from a mix of beef and lamb. If you cannot find merguez in your neighborhood, any spicy or herbal sausages will do.

Now then. On the launching-a-web-site front:
1) I’m afraid I’m not very tech-y and somehow managed to wipe out all the comments of people who wrote in the first day (Monday Sept. 10). My apologies. I will now try to post them below.
2) I am desperately seeking someone who can help me iron out some of the wrinkles associated with this launch. If anyone knows of a Paris-based web designer or web technician, could you kindly let me know?

Pauline AV says:
Hi Meg, et bienvenue au Blogosphere !
I love the clear presentation and the veggie header pic, and look forward to seeing you turn your talents to the veggie repertoire.

Meg says:
Hi Pauline. Well, yes, ‘The Everyday French Chef’ takes a fresh and seasonal approach to cooking — and the site will feature plenty of dishes likely to appeal to the gourmet vegetarian, as well as other French foodies. I expect to put one up in the very near future!

dgforbes says:
Sounds delicious. As a variation on olive oil, I would recommend either walnut or hazelnut oil together with the addition of either nut, crumbled, to vegetables or salads as a crunchable contrast that echoes the oil used.

Meg says:
Many thanks for the tip.

Julia Watson says:
How do the rest of us get invited? Yum!
Keep cooking… Julia

Meg says:
Grazie mille, and I may just call on you for advice on some recipes that came to me here in Paris via Sicilia…

Ann Mah says:
I love the slightly exotic combinations of flavors you used — the touch of curry, the splash of pastis. I can’t wait to unpack my kitchen so that I can replicate this meal at home!

Carol J. Williams says:
Meg – I love the simplicity and streamlined preparation. I will definitely be stealing these recipes for my own dinner parties.