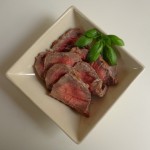 The French roast their beef astoundingly quickly. The first time I bought a roast in Paris — where it’s customary to ask the butcher about the cooking time — I nearly fell over when he said to preheat the oven to a high temperature and roast the beef for 10 minutes. And yes, roast beef is consumed very rare in France. But that sounded ridiculous! Over time, however, I have come to appreciate the French method of cooking what is called le rosbif.

The dish that results from this almost Tandoori style of roasting is crisp on the outside and succulent on the inside. It’s true that I extend the cooking time by about 5 minutes per pound in order to achieve a roast that is rare to medium rare, and not bleu (extremely rare), the way many French diners prefer it. Accompanied by a potato gratin and a green salad, it makes a meal fit for the royals who were overthrown in the French revolution. Or you can serve it cold with homemade mayonnaise for a delightful lunch or supper.

For the last week, in a welcome distraction from the wave of terrorism here in Paris, I have been attending a seminar on paleo food — and by this I mean not the current trendy variety but the kind of food that was eaten by our ancestors in the Upper Paleolithic, or late stone age. And, as it turns out, roast beef or a variety thereof is perhaps one of the oldest dishes that our species, homo sapiens sapiens, has enjoyed. They hunted the aurochs, an ancestor of the cow, with increasingly sophisticated stone tools, and roasted the meat on a spit over a fire, or so I was told. As the class was in French, we were learning about the earliest modern humans who inhabited this part of the world — making it safe to say that le rosbif is truly a French classic. Its name, of course, is a tip of the hat to their neighbors across the Channel, the English, also known here informally as les rosbifs…

With regard to last week’s post, I’d like to thank all of you who wrote in to express your concern and support regarding the events in Paris. I took part in the march of more than a million people here on Sunday, a moment of amazing solidarity. Things have calmed down in recent days, although this morning there was a bomb alert at the Gare de l’Est, the railway station from which trains leave for eastern France and much of eastern Europe. This atmosphere has put everyone on edge. But I find that going into the kitchen to do something creative is a great antidote.

This entry was posted in 7. Meat Dishes and tagged French, recipe, roast beef. Bookmark the permalink.